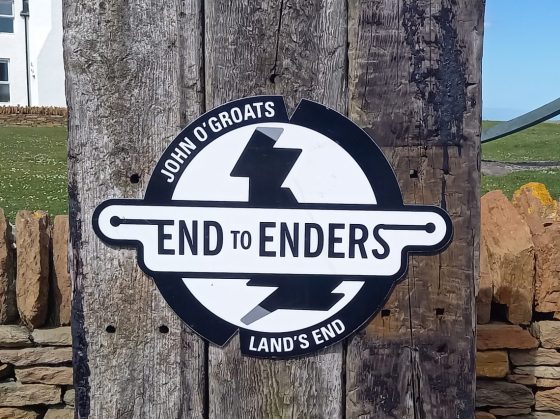 Friday evening having just got home
from Exeter, my phone rang, it was an excited John Cooper (JC), another
unexpected development this time in Harry Thomas’s Cave on Gower “drop
everything and come over, you’ll be able to get in”. So, to Gower for the
weekend.

Saturday: Another early start, 05:00 alarm.
After walking the dog, got back and started to get my act together. An
assortment of kit, just in case, rope, ladders, hangers, SRT kit, cows-tails and
shunt, etc. Got the kit loaded into the hire van I’m currently using for work
purposes (squared with the boss beforehand), breakfast and was on my way at
08:00. Arrived Overton at 10:30, met JC and we made our way along the path to Harry Thomas’s Cave. At the cave
entrance, we got ready to go underground. Just before we ventured below, some
filled bags were moved along the path.

At the bottom of the cave, JC’s
open space did, indeed look enticing and rocks could be heard to rumble on. A
narrowing of the main fissure, c.200mm width, appeared to widen considerably,
c.2m lower down. A boulder strewn floor/slope could just about be seen. It was
a tad awkward head first in the narrow fissure, even more so when trying to
extricate myself. Poked and prodded some jammed rocks, filled some bags, but
most of the spoil was kicked down into the space beyond. JC passed a heavy
wrecking bar, some blows from that on a couple of key-stones did the trick, and
the boulder floor I was sat on, disappeared. Luckily, I was firmly positioned
in the fissure. Soon there was enough space for me to wriggle through into the
enticing space ahead. I slid down a loose scree slope, mostly cobbles and
boulders of limestone, into a roomy, quite well decorated chamber-like
continuation of the fissure, c.4m length, c.5m high and c.2.5m width, dominated
by a large calcite flowstone boss. There were lots more animal bones,
surprisingly most of them appear to be fox, I counted 6no. skulls. I took some
photographs before making my way back out of the extension to re-join JC. 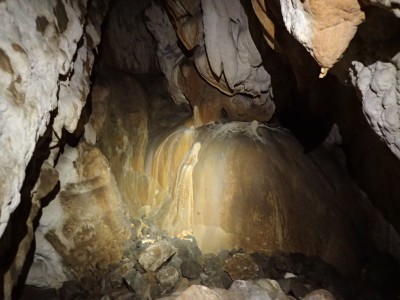 The
calcite flowstone boss in the extension 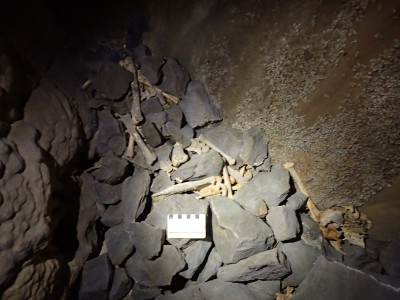 We shifted some of the filled bags
from where they were stuffed in various places throughout the cave toward the
surface, some went along to the end of the path. About 15:00 we called it a day
and exited the cave. After securing the cave gate we went in search of Rick
Schulting who was, apparently, starting an archaeological excavation in a cave
nearby. We found and looked at several interesting things, but we didn’t find
Rick. Got back to the vehicles about 17:15.

Fish and chip supper in Port Eynon
for me, then got some supplies from the garage in Knelston and up onto Cefn
Bryn to park up for the night. After watching La Vuelta highlights (on Samsung
tablet with Bluetooth connection to phone), Simon Yates won the Tour, I got my
head down. I then discovered the hire van has an alarm to the back, which was
slightly surprising and a frantic search for the keys to turn it off.

Sunday: It had been a very windy night,
awoke to a grey overcast and, still windy morning. I had arranged to meet JC
and David Hughes (DH) in Overton at 09:30. I hadn’t bought anything for
breakfast, planning instead to get something in Port Eynon, unfortunately
nothing was open. I went, instead to the shop in Scurlage where I purchased a
hot sausage baguette.

Met up with JC and DH, a wet walk
along the path to Harry Thomas’s Cave.
After getting changed we moved more filled bags from the entrance, along the
path. I went underground and climbed up to swap the ropes around so that the
safety line would be more effective. Then, down into the extension, some more
photographs, before trying to enlarge the access slot. It was like a game of
‘Ker-Plunk’, pull one rock out and a whole lot more came tumbling down, making
the climb back out steeper and even more awkward. JC couldn’t accept that he
just wasn’t going to get through at this stage, even more importantly he would
not be able to get out. Eventually, we came to the sensible decision this was
getting us nowhere and spoil should be removed from the top down. I jammed in
some pieces of timber to try and stabilise the scree but was not convinced they
were very effective. JC insisted on bringing down another ladder down to the
bottom, adding to the clutter and not helpful. DH wanted to get away at
lunchtime, so we packed up, secured the cave, and had a damp walk back to the
vehicles.